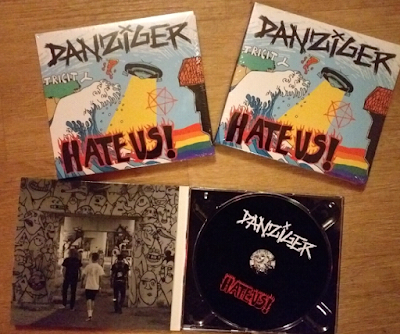 Here at Lickerish HQ we are chuffed to bits to get a hold of a few copies of Danzigers latest release for the distro. Polish power trio from Gdansk. A force to be reckoned with. To be honest I was so pleased about it I thought that I would write up a little piece about them, us and do a review of their album to boot!

Just over a year ago ourselves at Lickerish were preparing to visit Poland for a weekend of gigs in our respective bands (Kringer and The Battle Katz and Eye Licker). We were to play Gdansk and then Olsztyn and return the Monday. We did try for a Warsaw gig or similar; however, it was not to be. We were chuffed just to play 2 gigs and could not wait to get over. Over the course of the few days there were many funny stories and anecdotes I could recount; however, I will keep it relevant for this and those can wait for another time. 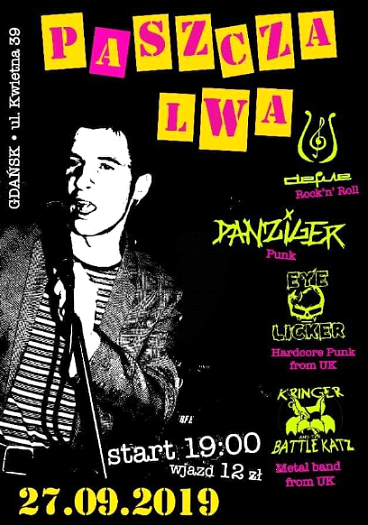 So the place we were to play was on Olliwa, which is just outside of Gdansk, at a bar which translated into English as the Lions Den or mouth, I can’t recall, either way it was quite apt for our first experience playing outside of the UK. After hanging around for a while, reassuring our nerves with some strong Polish beer (especially Mr Kris!), eventually all the other bands turned up. The place was a great beach bar on the edge of a beautiful, but small, lake. We were to play with 2 other bands that night. The “headline” act turned up, an indie band, and did a soundcheck that took pretty much all the allocated soundcheck time up from everyone. I cannot recall what the band were called. They spoke to pretty much no one apart from the sound guy and their entourage. They then proceeded to bugger straight off and get absolutely hammered elsewhere that no one saw them again for the rest of the night! I know I have been drunk at gigs but missing the entire show? Never! As well as that their singer was on the poster! I heard, although cannot confirm, that they turned up later in the night once it was all over way too drunk and were told to take their gear and go. Either way they were a bunch of losers and missed out on a great night. Probably just as well really. We all got to play longer and there was no boring indie! 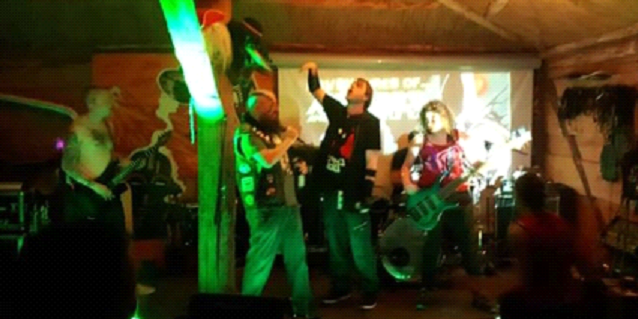 The other band we were playing with that night; however, were Danziger, a complete contrast! I’d heard their name before we went over, as a potential band we’d be playing with, and liked what I heard. Tytus, the frontman and guitarist, was an absolute gentleman all night. They were open and talkative and just like us they were really excited to play. Even if it was “just down the road” for them. By the time the music started the venue was rammed. Bodies were literally flying everywhere. Beers even more so! For a cold wet night in September the place was on fire. The last band to hit the stage, by now soaked in sweat, saliva, and lager, were Danziger. Bang from the first chord they had it. Ears shot up, the hairs on the back stood up and conversations cut short. The last bands on! Quick! We were not just there to play but to see some bands. They were fast, melodic, charismatic, and loud. I cannot recall too much of their set that night (blame the travelling but more so blame the beer) but it was a pure cathartic release and our turn to join those flying bodies! All I remember thinking it was pure punk rock. Afterwards they kindly donated their 3rd of the gig earnings to help us out as the travelling bands. A favour we shall not forget! We asked later of we could stock some of their CD’s for our distro; however, they declined saying that they were releasing an album and that it would be awesome. We believed them. 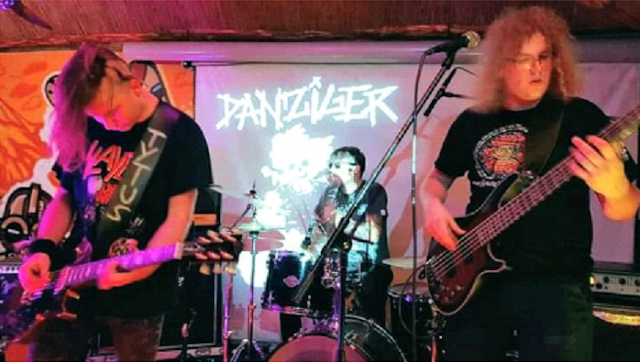 Fast forward a year later and we now have their CD called “Hate us”. And they were not wrong. It is awesome.

The first thing to talk about is the artwork and packaging. I love that brightly colourful and chaotic artwork that is very much akin to Dookie and that is not where the Green Day similarities end. Although most of the songs on the album are in Polish the booklet provided has English translations of all the songs. Which is very nifty indeed! I think my favourite lyrics being that of “500+ NA NARKOTYKI” a song with a great chorus and great little guitar solo before smashing back into the chorus. The usual song about wanting money for drugs. Which pleases this immature fool. But the song is not just about juvenile notions but about political and social issues relevant to Poland. A theme that carries on lyrically throughout “Hate Us”. A mix of juvenile immaturity and political angst so common with great punk bands. Or any punk band.

The opening song just starts nice and melodic with a lot of “Hey’s” to sing along too and a bridge akin to The Clash. Thick and full guitars. A nice beat and some great vocals. The gang and backing vocals throughout sound brilliant and really bring an extra wallop behind the main vocals. Danziger stick with that throughout with only one song taking things down a notch called “Daily Worries” which sounds very similar to When I Come Around and Two Princes and has some great bass lines and lets Tytus’s voice shine. I can’t help but be reminded of Los Fastidios when I listen to them. Only without the ska elements. It maybe that it is in Polish or Tytus’s voice. Either way I really dig it from the get-go. 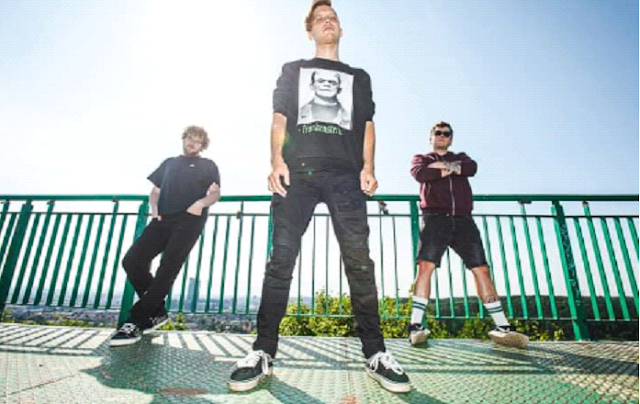 There are a lot of similarities with Green Day (as previously mentioned), Strike Anywhere, Anti Flag and Social Distortion on Hate Us. “Don’t believe us” is a nice pop punk number with a bit of Oi in there that reminds me of Cock Sparrer. Once again with those guitars and backing vocals really giving it a bit of power. But then songs like “Wyspa” throw in a bit of something different showing off that Danziger can play more than just punk. I think my favourite tunes of the album either must be the self-title “Danziger” or “Rzady Idiotow”. The latter starting with a great bass line that comes straight out of The Casualties rule book along with accompanying gang vocal whoahs! Featuring another delightful guitar solo and with lyrics about the world being run by idiots.  Which they are not wrong about!

So Danziger are not trying to re-invent the punk rock wheel here; however, what they are doing is releasing some great music. The tunes are belting and really stand out played alongside some great musicianship. You can tell that not only can this power trio write a song then can play it too! Which not only translates on plastic but on stage too.  Hate Us might not be your favourite album this year but it will be one you will listen to over and over again. If you enjoy the era of punk such as the Epitaph bands and grew up playing Tony Hawks Pro-skater 2 then you will definitely love these. Hopefully once the Great Big Nothing of 2020 is over and bands can start gigging and travelling again we will be able to bring Danziger to sunny Stockport.

Anyway check out our store and go grab yourself a copy!